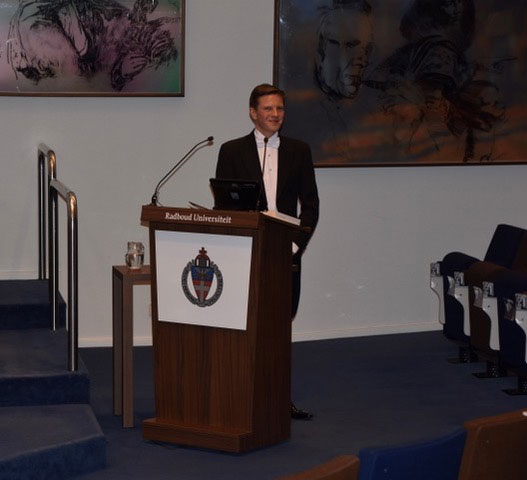 Part of his work in the Thomas Boltje Research Group at the Radboud University involved a collaboration with PharmaCytics. These research efforts culminated into a patent. We keep working with the Boltje group on these topics. 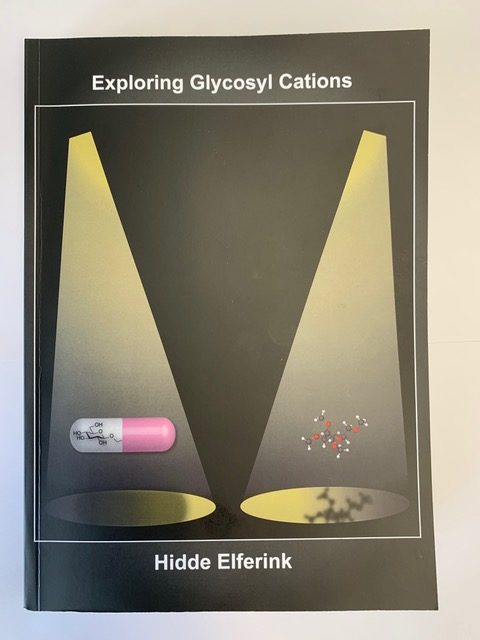 As PharmaCytics we would like to congratulate Hidde Elferink with completion of his doctoral thesis on “Exploring Glycosyl Cations”. Part of the study was done in a collaboration between the Radboud University and PharmaCytics.

We would like to express our gratitude to Hidde and his supervisor Thomas Boltje for the pleasant collaboration and for their contribution to the work of PharmaCytics.

We wish Hidde good luck with the public defense of his thesis on May 20th 2021 and all the best in his future career.

PHARMACYTICS TO BE SELECTED FOR THE EIT HEALTH GOLD TRACK

PharmaCytics is very proud to be selected for the EIT Health Gold Track.

The programme includes support for one year from industry experts, successful entrepreneurs and seasoned investors, who will work one-on-one with the company.

We are looking forward to start the programme! 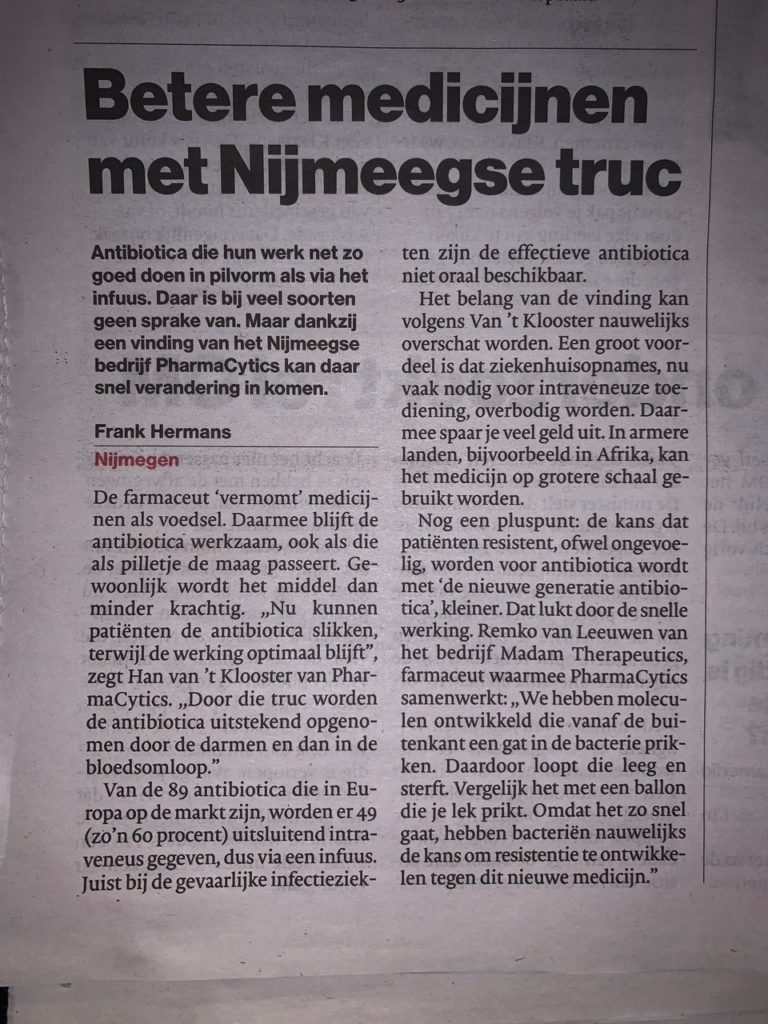 Resistance to antibiotics is an increasing problem worldwide. In the US, someone gets a bacterial or fungal infection that is resistant to antibiotics every 11 seconds and someone dies from it every 15 minutes, the CDC reports.

In Europe, 33,000 people die every year from an infection that can no longer be treated. A urinary tract infection with a resistant bacterium can sometimes be fatal.

The need for new antibiotics is therefore great. Madam Therapeutics specializes in the development of a new generation of antibiotics, the so-called SAAPs. SAAP stands for Synthetic Antimicrobial and Antibiofilm Peptides. Remko van Leeuwen, CEO of the company: “We develop peptides, small molecules, which work very differently from current antibiotics. Most antibiotics work quite slowly, but our SAAPs pierce a hole in the bacteria from the outside, causing it to drain and die. Compare it with an inflated balloon that is punctured. We have a whole arsenal of peptides that work this way. Because it is so fast, bacteria have little or no chance of developing resistance to this new generation of antibiotics.”

The problem faced by Madam Therapeutics and other manufacturers of these new antibiotics is the method of administration. Peptides are small molecules that are broken down quickly when they enter the body. They will not survive a stay in the stomach anyway. Hence, such antibiotics almost always have to be injected, which greatly limits their use. This is where the expertise of PharmaCytics comes into play. The company has developed the Nutrient Drug Conjugate technology (NDCt), which allows them to disguise all kinds of medicines as food. They are now also going to do this with the peptides with an antimicrobial effect.

Han van ‘t Klooster, CEO of PharmaCytics: “Our technique links a food group to the peptides, causing the digestive tract to think it is related to nutrients. Due to this disguise, they are excellently absorbed by the intestines into the bloodstream. The greater uptake – bioavailability – may even allow for a lower dosage. Once in the bloodstream, the link is broken and the peptides can exert their antibacterial effect. In short, with our technique we go from injection to pill”.

There is a great need for new, powerful antibiotics in pill form with less risk of resistance. Both PharmaCytics and Madam Therapeutics emphasize the importance of this for the patient.

Such drugs can make a major contribution to reducing the number of deaths and the enormous health damage caused by antibiotic resistance. The collaboration between the two innovative Dutch biotech companies has been facilitated by PharmaTide Invest.

PharmaCytics has launched a new logo and a new corporate design! 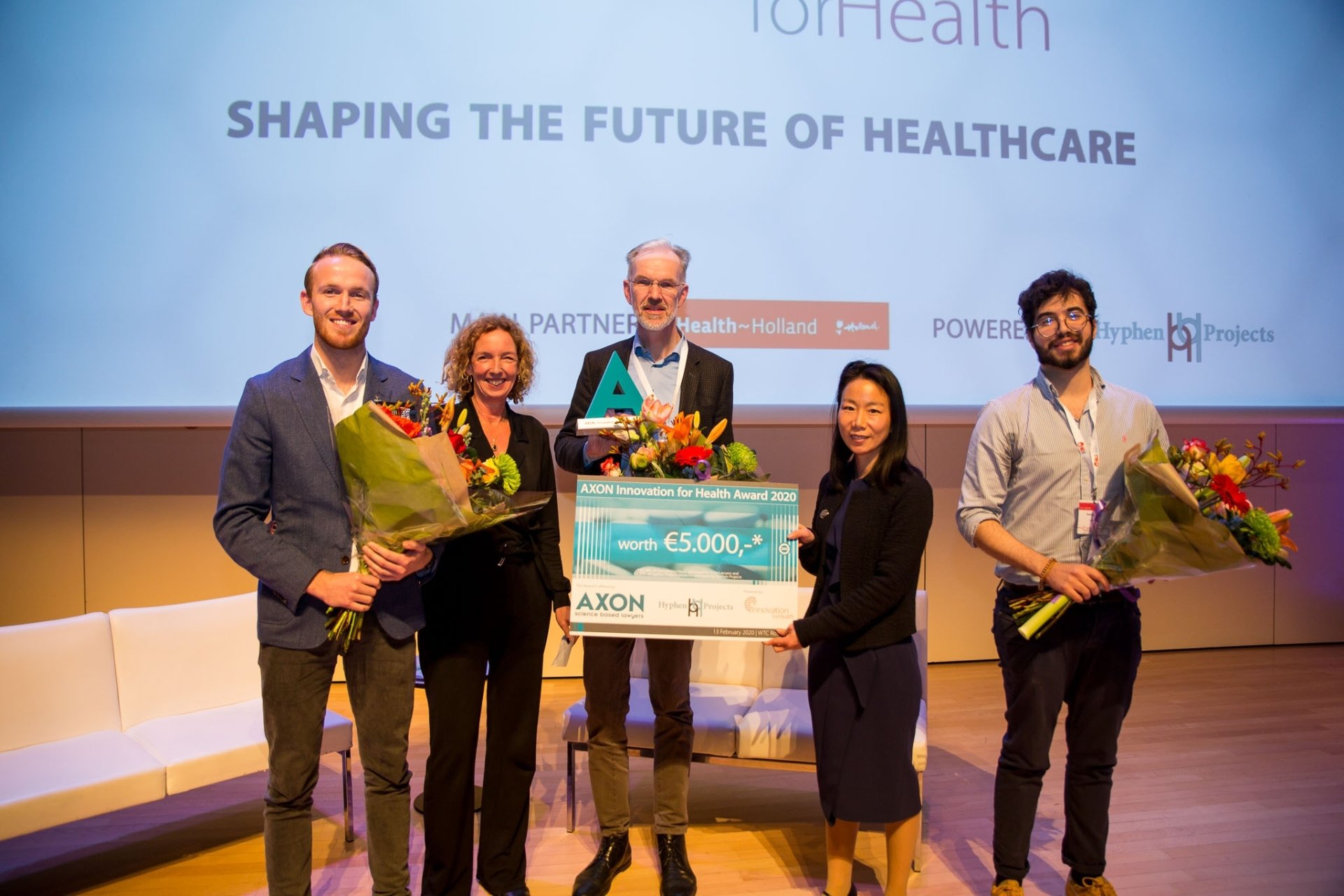 PharmaCytics has won the Innovation for Health & Global Investor Forum award 2020. PharmaCytics got the popular vote as well as a unanimous vote from the Jury, consisting of investors. For PharmaCytics this is an important step in recognition of the value of our Technology that can turn parenteral drugs into an oral variant by making them look like nutrients.